A vinyl toy design Lopez did for Sanders Wingo

Osaple began in 2010, selling red T-shirts reminiscent of the Coca Cola brand, but instead with the words reading “Chuco Chula.” El Paso natives can appreciate buttons that list our parts of town. There’s the “West & Upper Valley & Downtown & Segundo” option or the “Northeast & Central & East & Lower Valley” one.

One of Osaple’s latest projects is the “I (star) EP” mural the collective did with Diego “Robot” Martinez and other artists. It adorns the wall of The Venue, formerly called The Garden. The design of course calls to mind the famous “I (heart) New York” T-shirts, but instead with one of El Paso’s most prominent landmarks – the star on the Franklin mountains.

“We’re honoring other brands and other kinds of designs by marrying it with a very unique sense of humor that only El Pasoans will understand,” Lopez said. “It’s about the fun and the joyfulness and the pride we have for this city.”

What’s missing from the mural is the “I” in “I (star) EP” – that’s where local passers-by come in.

“This way, they can take a pic in front of it and literally be a part of the design to show their pride for the city,” Osaple co-founder Gabriel Acuña explained.

A former military brat who lived away from El Paso throughout his childhood during the ’90s, Acuña had an appreciation for El Chuco that many didn’t at the time, to put it lightly.

“It began to annoy me. Why couldn’t people see El Paso the way I saw it and love the city as much as I did?” Acuña said. “After a while, I was determined I would do something to change that mentality.”

Thus, Osaple was born. Other than Acuña and Lopez, Isaac Villalpando is one of the main artists behind the collective’s designs.

Outside of Osaple, Lopez is the art director for the local branch of the El Paso-Austin-New York-based ad agency, Sanders Wingo. Some of his most seen pieces are the designs he did for Sun City Craft Beer Festival, El Paso Downtown Street Festival and Coffee Box. Symbolism and simplicity drive the work he does for clients both at Sanders Wingo and as a freelancer.

“I like clever ideas. I like how simple things can say a lot,” Lopez, a fine arts graduate of UTEP, said. “You don’t have to draw a lot to come across with a strong idea.”

Lopez admits he misses drawing by hand – something he intends to make time for. His lithographs and etchings have a much different style, with darker illustrations inspired by the human form.

“My hand drawings are a little more obscure,” Lopez said. “I love to draw the human body. It’s a little more complex and a beautiful shape no matter what position or what the context is.”

As for the homage to El Paso’s demolished smokestack that Lopez illustrated for this month's Coloring Corner page?

“The new generation will never know what Asarco was,” Lopez lamented. “It’s just creating some memories of landmarks in a fun way.” 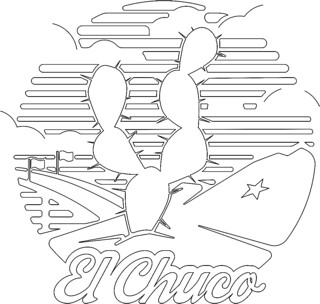 Don’t miss our next Adult Coloring Book Night on Thursday, July 27 as part of the Last Thursdays Downtown art crawl. The fun starts at the home of our sponsor, DeadBeach Brewery, on 406 Durango St. at 5 p.m.! We’ll also color the work of Osaple artist Isaac Villalpando (pictured above). Visit WhatsUpPub.com to see more of Lopez’s work. Osaple T-shirts can be purchased at Proper Printshop.

Deadline to submit is noon on Tuesday for your event to make it into that Sunday's print edition.

Sorry, there are no recent results for popular images.

Sorry, there are no recent results for popular videos.

Sorry, there are no recent results for popular commented articles.