Next Friday, Sept. 30, short fiction writer Blake Heath and illustrator Pablo Martinez will host Alamo Drafthouse’s screening of the cult classic gore flick, “Re-Animator.” The two are the creators of “The Dastardly Doppel Duo,” an activity book that includes a word search, maze, coloring pages and comic strips that follow the horror-ific siblings Doris and Denny.

Heath and Martinez took time out of their day to answer a few questions for What’s Up.

BH: Doris and Denny Doppel are 10-year-old twins who live in the fictional town of Arkham. Doris is a little magic practitioner, dabbling in the darkest arts she can get her hands on. Denny on the other hand is infatuated with super science and experimentation – a true mad scientist. They create monsters and play with knives, typical kid stuff. It’s all very horror genre related and referential.

If you could get killed by any horror villain, who would it be and why?

BH: That’s a great question. I would want it to be absolutely epic. Maybe chainsawed in half by Leatherface after a futile attempt at escape. And I don’t mean like Darth Maul. I’m talking from crotch to face, with lots of blood and screaming.

PM: Spoilers ahead - I’d choose to be killed by IT. Not Pennywise the clown, which is only a form taken on by IT to first lure then murder and eat children, but by the beast called IT. See, IT is a mind-reading shape-shifter and it hunts you to feed on your fear. Think of how screams are collected and used as energy in Monsters Inc. Well, IT kind of operates on that same principle. It reads your mind to find out what you are most terrified of and it BECOMES that, rips away your sanity and feeds on your screams and terror and flesh. I don’t even know what my biggest fear is, but finding out through IT before losing my mind and being torn to shreds? Sounds neat.

Tell us about the podcast, “Four Eyed Horror.”

BH: Four Eyed Horror is a horror genre podcast I started in March of this year. Danny Martinez and Pablo Martinez (no relation), two of my best friends, are the most regular co-hosts, but we’ve had a few other awesome folks join us. Let me say, I am by no means a film expert or horror historian, but I am a complete horror nerd. It’s really just a great excuse to watch more horror movies and talk about them with my friends. We also talk about board games, video games, comic books and even local traffic problems if the mood strikes. It’s widely available on iTunes and other podcast catchers.

Follow The Dastardly Doppel Duo at facebook.com/DoppelDuo and on Twitter and Instagram @doppel_duo. To purchase a copy of the activity book, visit blackzooka.com. Those who attend Alamo Drafthouse’s 10 p.m. screening of “Re-Animator” on Sept. 30 will receive a free copy of the book along with a limited edition movie poster. Purchase tickets at drafthouse.com/el-paso. 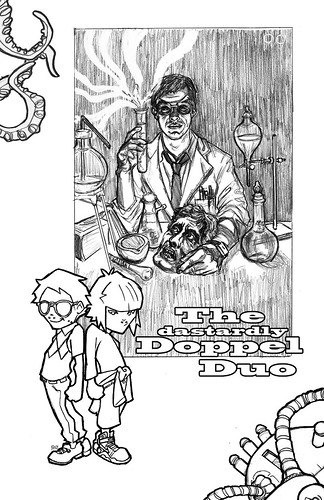 Deadline to submit is noon on Tuesday for your event to make it into that Sunday's print edition.

Sorry, there are no recent results for popular videos.

Sorry, there are no recent results for popular commented articles.